Last night we went to our first Marshallese Party. Baby K’s foster family invited us to their home to celebrate their 25th wedding anniversary. The party started at 7:00pm and we weren’t sure if that was the US 7:00pm or the Marshallese 7:00pm, because there is definitely a difference. Marshallese time is at least 30 minutes later than what is stated.

We arrived a little after 7:00pm and were the first guests. I have never seen so much food-rice in an 18 quart plastic container, large platters of grilled chicken and chicken wings, freshly husked coconuts, sliced breadfruit, fried fish, roasted pig, and other things that I couldn’t identify.

Most everyone here cooks meat on open grills outside over wood. You can almost always smell chicken grilling wherever you go. The fish was red snapper that Len had caught that day as part of a fishing tournament. Fisherman’s day is July 3rd and each year they have a big fishing tournament.

Mary and Len were so gracious and showed us around their home and more importantly, the home where Baby K spent the first 10 weeks of her life. They were so happy to see her. It was really touching to see how Len held her. It was so obvious that they cherished this baby while she was in their care.

My Dad would have been so impressed with Len’s garden-he had coconut trees, six different varieties of banana trees, cantalopes, melons, and some beautiful tropical flowers. He also had chickens, a pig and the biggest sea turtle that I’ve ever seen. Russ estimated that she probably weighed 125 pounds or more. In the Marshall Islands it is legal to eat sea turtle, you can’t sell the meat or parts, but it is traditional to eat it.

Mary gave all of us hand woven necklaces and two really beautiful shells for the girls. As we were leaving, Len gave us a bag of freshly husked coconuts and told us to look for “the face” on each one and then use something sharp to open what would be “the mouth”. Russ and I have looked at all of them and don’t see “the face”. We haven’t given up on them but we’re going to have to find something pretty sharp to open them with. I’ll keep you posted on how that goes:-)

The other day I tried a traditional Marshallese dish called pumpkin rice-delicious! The Marshallese eat it as a side dish but it is sweet like a dessert. It reminded me of rice pudding. We’ve made friends with the manager at Tides Table and I’m hoping to acquire the recipe before leaving. It would be an excellent addition to Thanksgiving dinner.

We made another trip to Laura Beach and enjoyed it even more than the first time. It’s hard to believe that this place isn’t crawling with tourists. I’ve posted some pics of the sea turtle, and of the girls at Laura Beach. 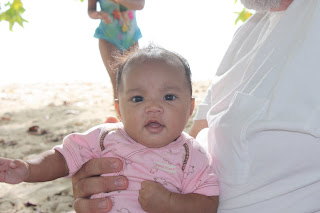 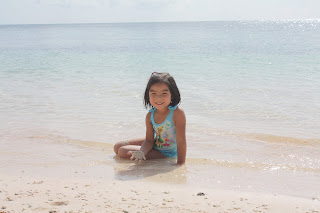 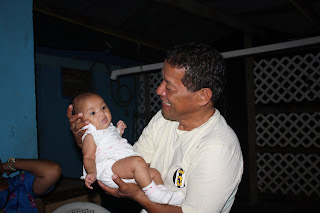 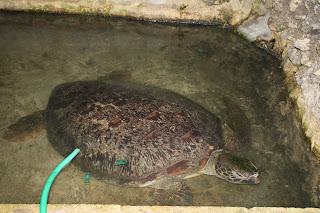 Mary and Len's Turtle
Posted by About Us at 9:12 PM