Two sweaty grown-ups, two whiney kids, one hour and 100 pictures, and we have Christmas Card pics- 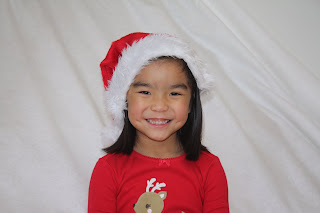 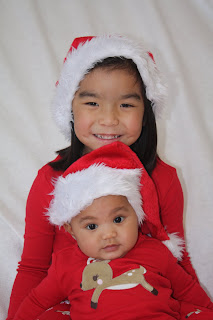 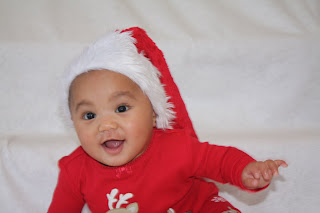 I know what your thinking-it's not even Thanksgiving and she's taken those girls to do Santa pics. To be honest, I figured I better start pretty early in case I needed to do them more than once if you know what I mean :-)

I'm actually pretty pleased with how they turned out. The individual pics are much better than the pic of both girls with Santa. We did that photo first and Baby K really wasn't too sure about sitting with Santa.

Note the matching outfits-many thanks to my friend K who made that possible :-) 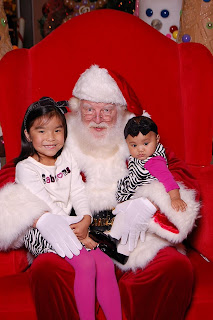 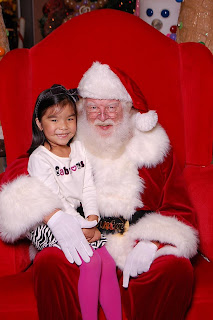 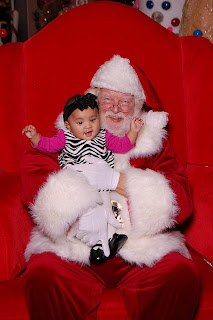 Wow! I can't believe two weeks have passed since my last blog post. Where has the time gone?

I wish I could say we were all recovered and healthy after the icky upper respiratory bug that hit our house but it seems to be lingering, or maybe it is something new. G and I still have or have reclaimed some sinus issues. I'm praying that all four of us will be completely well by Thanksgiving. I'm sure looking forward to made from scratch corn pudding and sweet potato pie-Thanks Grammy!

G is doing well in school and continues to be excited about going each day. Last week she attended a cheerleading clinic taught by the JV and Varsity cheerleaders. It was so cute to see all those little girls out there with the big girls.

Baby K continues to do what babies do-she just keeps growing and doing new things all the time. See pics below of one of her early morning play sessions (and by early I mean before 7:00am). 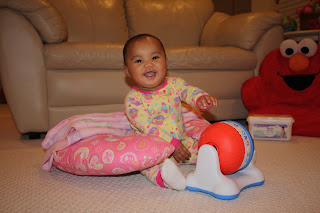 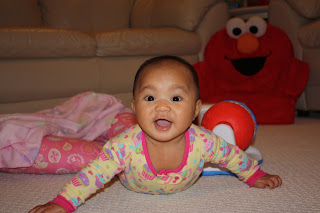 I knew it was inevitable-eventually all of us were going to get sick at one time-this is our time and hopefully our only time this year!

G has caught two colds since school started. The first one missed the rest of the family but the second one has really packed a punch. I got it, then R got it and finally, Baby K got it. It seems to be a really nasty, head cold, upper respiratory thing but with no fever. Of course the exception has been Baby K who was running a fever and so I took her to the pediatrician yesterday (scared witless that it was the H1N1 flu).

This wasn't our usual pediatrician but the doc on call, and he was a nice surprise. I've been recently disgruntled with some things that have happened at our regular docs office and this really got me to thinking about changing-but more on that later.

After checking Baby K's weight-now up to 18lbs-cleaning the wax out of her ears and doing a nasal swab for flu. He announced that the flu test was negative and that most likely the poor baby just has the same head cold/upper respiratory sickness that the rest of the family has.

I was relieved to know that it wasn't the flu but still dismayed that I can't give her anything to make her more comfortable. At least the rest of the family can take over-the-counter cold meds but poor Baby K has to just tough it out. For all those mothers out there, that's code for "Mommy and Baby K" tough it out since Mommy is the one who gets up in the middle of the night when Baby K coughs and wakes up:-)

Thankfully, the girls felt good enough and the weather cooperated for just a little bit of Halloween festivities. On Friday night we went to Aunt Kerry's and Uncle Wes's annual Halloween Party-complete with a bonfire. Note-the girls dressed as cats for the party. On Saturday night we took in a little trick or treating with Baby K going to visit the neighbors in the cul-de-sac and while R and I took her home, Grammy and D-daddy took G around the neighborhood. Note-different costumes for trick or treating :-) 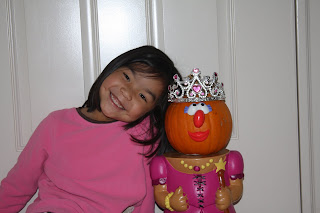 G and the Pumpkin Princess 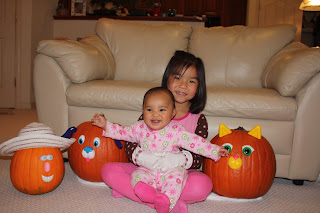 The girls and their pumpkins 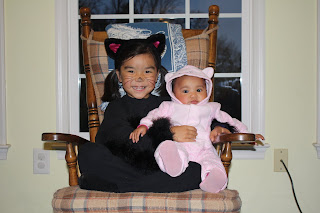 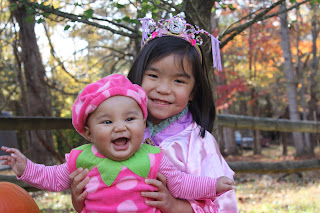 Princess Mulan and her Strawberry
Posted by About Us at 6:03 AM No comments: