Just strollin' along, singin' a song.....this is how I feel about God most of the time.  I know he's there but I often don't take the time to really acknowledge his presence in my life.

There have been a few times when I have been able to say, "I saw God today!" Like when I first laid eyes on the pictures of  my beautiful babies, but for the most part, my relationship with God is on autopilot. 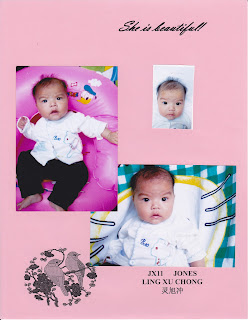 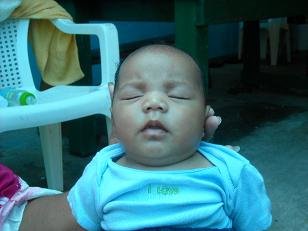 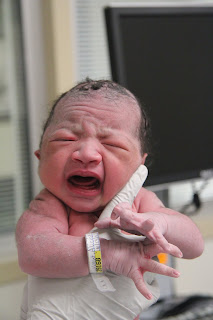 It is kind of like when you're driving one of those antique cars at the amusement park.  You are thinking that you are in control, just driving along, but in reality, there is a strong, rigid guide underneath of the car that won't allow you to jump off of the track.

And then there was yesterday.  Looking back over the past couple of weeks I can see now that God was in control.

My Dad has been having some indigestion and increased fatigue.  His primary care doctor prescribed him something for the indigestion and the fatigue symptoms were simply written off to increased dose of one of the medications that he takes for Parkinson's.  But to be on the safe side, his doctor ordered a stress test.

He took the test and a couple of days later the nurse called and said that he would need to follow-up with a cardiologist because the one side of his heart was pumping at a reduced rate.  As luck would have it, the cardiologist had an opening for a consult on Thursday and the next thing I knew he was scheduled for a heart catheterization on Friday morning.  We were all a little nervous about the very quickly scheduled test and with good reason.  It was determined that he had a 99% blockage on the left side of his heart.  The cardiologist was able to insert a stent and immediately the blood started pumping correctly and the right side of the heart started to relax from the strain of having to do the work of both sides.

Less than 24 hours after the catheterization, my Dad left the hospital  and is now at home resting.  His only instruction, not to lift anything over five pounds for three days, not because it would be difficult on his heart but because it could strain the area in the femoral artery where they inserted the tube for the test.

Luck or divine intervention?  I guess it depends on where you stand with God but I will add this moment to my list of days when "I saw God!"
Posted by About Us at 7:59 PM No comments:

Trying to get a quick post up with Baby M's 18 month stats!

At 18 months she is 22lbs 11 oz and 31 3/4" tall.  That is still approximately two lbs. lighter than K was at the same age.  We've transitioned into most of the 18 month clothing.  The shirts are a good fit, the pant length is fine, but they are still a little big in the waist.

She can call G by name and often does so if I tell her no.  She calls K "LaLa". She will now parrot back just about everything you say to her--constantly amazing me!  She is becoming quite accomplished at feeding herself with a spoon and is showing a preference to being right-handed but will still occasionally use the left-hand.

My picky eater, is still a picky eater :-(  I am still slowly incorporating foods into her diet.  If left up to her, I believe she would eat ham, cheese, goldfish and macaroni and cheese every day!

Her play is becoming more imaginative.  She will "feed" her baby, "make" a cup of tea, and loves to play whatever G and K are playing.  When Baby M is faced with conflict among the siblings, she is usually the first one to get physical.  Poor K has had quite a bit of hair pulled out!  She has at times deserved it but I don't think I'm supposed to admit that as the parent! 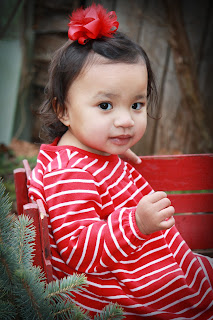 Welcome 2013!  I'm looking forward to all the wonderful things this year has to offer--time spent with family and friends, time to watch my girls flourish and grow, and time to recapture some of the things that I enjoy doing (that's code for enjoying a little more "me-time" this year).

Our family had a few changes in 2012 that we managed to get thru.  It might have not have been done gracefully but we muddled thru and we made it.  The biggest change was G's education.  We went from a private school to a university-model school, which equates to her being in class two days a week and homeschooling three days a week.  We also joined a homeschool coop where she has enjoyed some extra-curricular activities.  Homeschooling has been rewarding and downright difficult at times.  I love knowing what she is learning and being a part of that process but trying to incorporate study time with two little ones and then working part-time has at best, been challenging.  I'm looking forward to 2013 and knowing that I've got 2012 "under my belt" as we go forward.

R continues to work a mid-shift, meaning that he goes to work around lunchtime and then works late into the evening. It's challenging for our family time because he only gets to see the girls in the morning before he goes to work and on the weekends (when he's not working).  For those of you with children in activities, you know that most all activities are scheduled in the evenings after school.  So there have been times when I've had all three girls out in the evening, eating dinner on the run, and getting home way past their bedtime (and mine, too).  Hoping that I can be better organized for these events in the new year!

We've been doing a little "re-purposing" of the rooms in our house and will continue this project into the new year as well.  Sometimes (make that most of the time) I am completely overwhelmed by the amount of "stuff" that we have accumulated.  Funny how life can do that to you-how your ideal picture of what should be in your home is really different from what would be the most practical use of space in your home.  For years, we had a formal dining room complete with a nice table and chairs, and a hutch that contained china and crystal that was never used.  The dining room had become the drop-off point for everything that needed to be "dropped" when you came in the side door.   We made that big jump and got rid of the dining room furniture, made that space my new office, and turned the old office space into a playroom.  The playroom space is now right off of the family room, where everyone spends a lot of time, and so it is a much more functional space than before.  Our next "re-purposing" project is going to be the upstairs guest room which has now become the new dumping spot and then after that, maybe we'll start on the basement.

This post wouldn't be complete without a pic of the girls to finish out the year.  The following pic was taken by my fav photographer about a week before Christmas at Grammy and D-Daddy's house.  I am completely in love with the matching dresses because they are becoming fewer and more far between as the girls get older--very few places carry matching outfits in the range of sizes that I need now, so enjoy this pic of my elves in their red outfits! 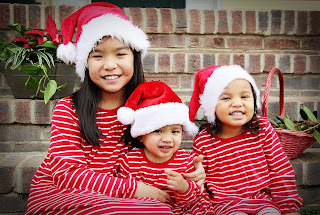