Recap of our last couple of days in Arkansas

It's hard to believe that it's been a week since we left Arkansas! The time seems to be flying by very quickly and Maddie is growing and changing daily.

I held off posting the last couple of days we were in Arkansas so that I didn't ruin the surprise of coming home early but want to go back and make a couple of notes so that I don't forget as time goes by.

Our last two days were bittersweet to say the least. Our birthmom was feeling much better and was able to spend a good amount of time with us those last couple of days. We knew at that point when we were leaving and had communicated that to her and we were working to finalize rental cars, etc. At that point, it was almost like a countdown in which no one really wanted to talk about.

When she was in the hospital, we had talked about going to visit the Marshallese stores in Springdale so that I could find some guams (Marshallese dresses) for the girls and some handicrafts (specifically the handwoven baskets). Wednesday evening we all got in the car and she took us to several stores and then as we were driving thru Springdale, she showed us where she worked and some of the places/things that she and the kids like to do.

Even though I was crazy homesick missing my girls, I really wanted to spend some more time with her and her kids. Our last night, we went to dinner at the OK Chinese Buffet and she gave us some gifts. Earlier in the week, I had given her a locket engraved with Maddie's name and birthdate and a small engraved box to keep it in. She gave us the most beautiful handmade picture frames with pictures of Maddie and us in them. What made the gift more meaningful was that these were things that belonged to her that she was now gifting to us--being the strong, silent type that I am (hahaha)I was in tears when she handed them to me. I'm hoping you can see the detail in the close-up picture of just how intricate the frames are. We were in the Marshall Islands for a month and I didn't see anything like these the whole time we were there. 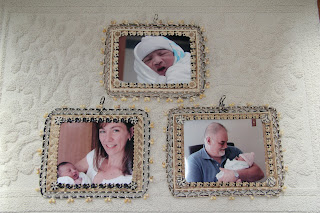 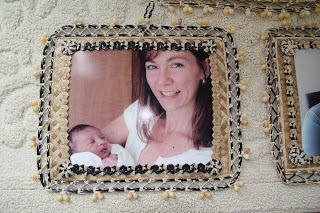