And I'm back up and running......at least for the moment

And the winner was.........a sinus infection.  It took about 5 days worth of antibiotics to start to feel "normal" again.   As always, when it starts out, I want to believe that it's just seasonal allergies and not the dreaded sinus infection but one would think after several years of this, that I would come to expect it in the fall and in the spring.  I would never let something like that go with my kids so I don't know why I do it to myself :-(

Anyway, trying to catch-up on my posts and so I have to regress to August when  G and her best friends had a day at the American Girl store. 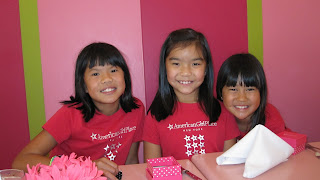 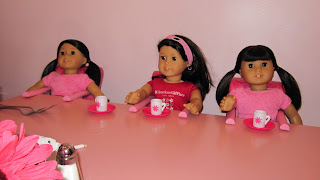 We arrived at the store early in the morning and caught a bus to the American Museum of History where we got a private tour (before they opened to the public) and then back to the cafe for lunch and some shopping time.  G had been debating for well over a month on purchasing Julie's new car and in fact had made several lists of buying possibilities, but in the end she purchased the dining room table, some food, and the new Halloween outfit.  She would have been more than happy to expand her list had I been open to making some purchases, but we had agreed beforehand that this trip was all about her spending her own money.

Also in August, G started cheerleading.  She and her BFF M are on the Seahawks cheer squad.  The girls practice outside at a local school and so I have K and Baby M with me when we go.  I'm not sure what I expected but K has been pretty interested in hanging out with the big girls while they practice.  So much in fact that she has learned a few of the cheers.  She's not technically old enough to join the squad and so she wouldn't feel left out, I picked her up a cheer uniform supporting what I hope will be the girl's college of choice :-) 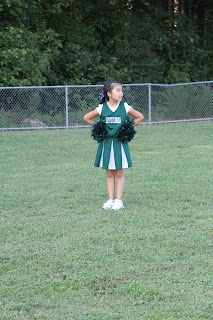 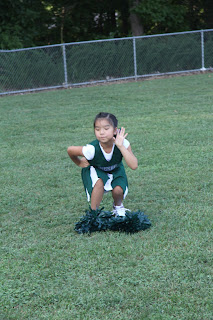