Some of my favorite baby/kid toys

With three girls who span the age spectrum, I am always looking for toys that they can all play with. It's a challenge to find things that aren't too "babyish" for the almost 8 year-old (she reminds me almost daily about that :-) and not too advanced for the younger crew.

Top of my list are Lego Duplos. I know they are a little "chunky" for the older crowd but it does allow all three kids to sit and play and have some interaction using the same toy. G builds, K throws and Baby M chews--I'd say that's a successful playtime!

Next on my list it's a tie between the Bright Starts Activity Center and the Playskool Busy Ball Popper. They both scan the spectrum on ages. When we first received the activity center, Baby M could barely touch the floor with her feet, now she is literally running around it. What makes it so great is that when she outgrows the seat part, it detaches and you still have the activity table to play with.

When G was a baby, we had one of the exersaucers--it was big, round, took up a lot of floor space and once she became a little mobile, she didn't want to be confined to it. We then purchased an activity table where she could stand and play. I really like that the Bright Starts Activity Center is a combination of the two toys. The circular design of the activity table also means that both Baby M and K can play with it at the same time--that allows me to relax, put my feet up and have a steaming, frothing cup of cappuccino. Okay, that's a joke, but it does allow me to stand in the kitchen and wash dishes and fold laundry while they are playing. Reality really stinks sometimes! 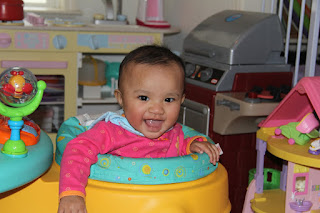 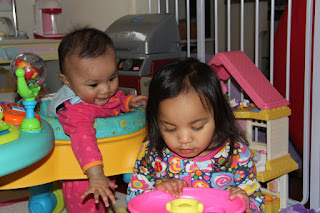 "Let me at those balls!" 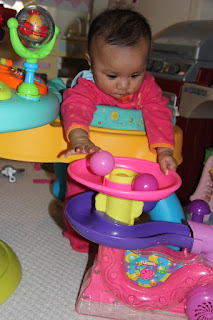