Where did Thanksgiving go????

Where did Thanksgiving go? I guess in my excitement to get to Christmas, I missed making a post about Thanksgiving-getting old is hell:-)

G had a Thanksgiving Feast at school and she was a pilgrim. The teachers had put together the cutest pilgrim accessories. Take a look at the pic below-the hat and the collar are fabric and are assembled using fabric glue. A very crafty and quick idea that I'll tuck away for next year.

Our family had a great Thanksgiving. First stop was at my parent's house and then about 3 hours later we went R's families home to eat again. As is the tradition, by the time we make it home, we are overstuffed and miserable from eating too much.

G spent Thanksgiving night at Grammy and Ddaddy's house and R and I took Baby K on her first Black Friday adventure. She was such a trooper! We were not part of that group that was out and standing in line at 4:00am but we did make it to our first stop by 6:30am. This year there wasn't anything that we were on a mission to find, which was nice. We just kind of went to a couple of places at our leisure and if we found something great and if not, no big deal.

R had off a couple of days over the Thanksgiving holiday and we used that time to start getting out the Christmas decorations. We put the tree up and did a little decorating around the house. Not as much as last year because we just don't have the space with all the changes we made in the room layouts when we setup the nursery.

I think R and G are going to put up the outside lights and decorations this weekend so I'll try to get some pics. Of course Baby K and I will watch the activities from the warm inside:-) 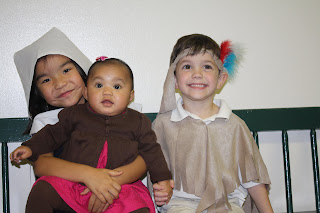 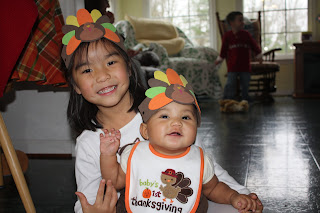 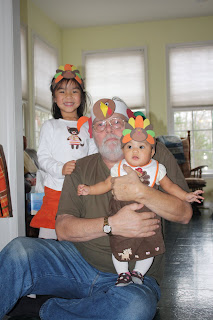 A whole flock of turkeys
Posted by About Us at 5:57 AM