This post should catch me up for October--it's hard to believe that we squeezed so much into October considering all the health related things that were going on. The week before we went to Sesame Place, K had a respiratory virus. She just came down with a fever and so R took her to one of our local urgent care centers because I was worried it was strep, but it turned out to be a virus.

The week after we came back from Sesame Place, Baby M came down with what I suspected was the same virus. Into the doctor we went and she felt that it was indeed the same respiratory virus that K had been struggling with the week before. Later that same week, I had both little girls in to the doctor for scheduled check-ups and at that time, the doctor said the ongoing cough was nothing to worry about, it just needed to run it's course.

Just a couple of days after that, Baby M came back down with a fever and this time, something just didn't sound right with the cough. It was a Friday evening and so I took her to our local urgent care and they did blood work and a chest x-ray and sent us to the emergency room with pneumonia. That was an experience that I hope not to have a repeat of anytime soon. We arrived at the ER at 10:30pm on Friday night (and this was after the urgent care had called to let them know we were on our way), they didn't put us in a room until 3:00am Saturday morning, and we didn't make it home until 8:00am Saturday morning. Can I just say that the emergency room on a Friday evening is a very interesting place?

Back to the doctor the Monday after that for a follow-up on the pneumonia, followed by a trip later in the week to the pediatric dermatologist to look at Baby M's ongoing rash. The rash should probably be a post all by itself because it seems like it has been present for a very long time.

Lots of thoughts thrown around by the pediatrician, the pediatric dermatologist and the allergy doctor but the initial consensus was that she was allergic to milk based formula. We successfully switched her to the gold-label Enfamil (and there's a reason it has a gold label on it), started following the skin care regiment given by the dermatologist, and have seen a marked improvement in her skin.

This past week we go for allergy testing and what does Baby M test positive for---cat dander. No milk or soy allergy detected--now go figure that out. The doctor said it may be a false positive reading on the cat allergy and so tomorrow we are doing blood work to confirm the results. I'll keep you posted on the results. I am of course hoping that the cat allergy is negative because if it isn't we are in for some lifestyle changes here at Chez Jones. The negative result could mean that we need to some remodeling (remove carpet, etc.) and the positive result could mean that we need to some remodeling :-)

Enjoy the following pics of our trip to Graves Mountain Apple Festival, a brief stop at the pumpkin patch (on our way home from a doctor's visit), and the girls in their Halloween costumes. 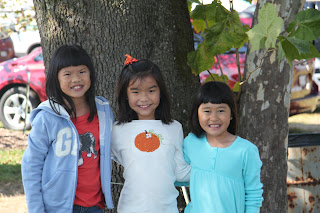 The Girls--G with friends A and M 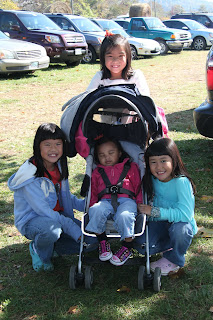 K trying to "avoid" the camera 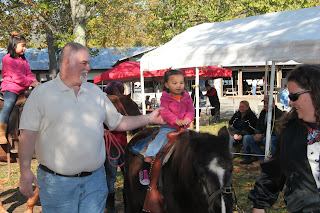 "Serious K" on the pony ride 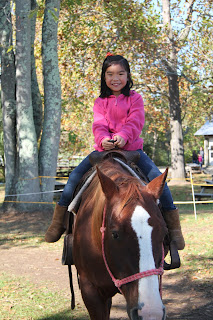 G on the pony ride 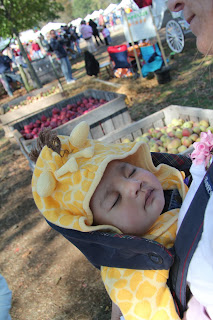 Cutest Giraffe at the Apple Festival! 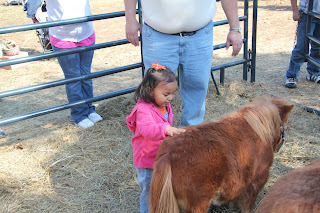 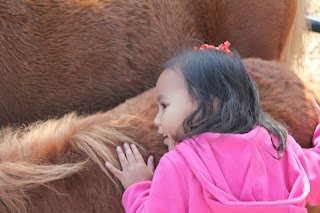 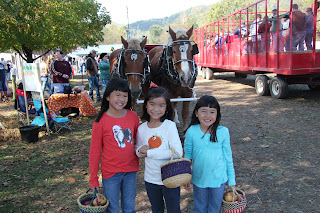 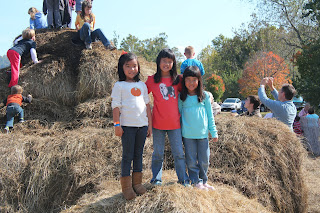 G with friends on the hay mountain 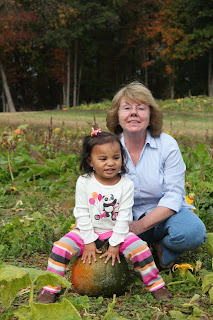 K at the Pumpkin Patch with Grammy. It was naptime and I was really fortunate to catch this shot without a scowl. 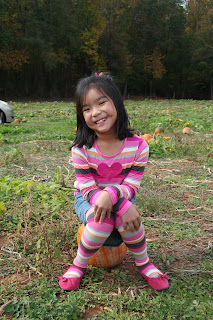 G at the Pumpkin Patch. I remember when she was younger and we would do this same shot of her sitting on a pumpkin and the pumpkin looked as big as she did! 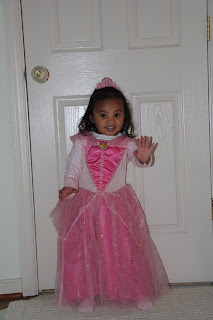 K was a princess for her preschool Halloween party 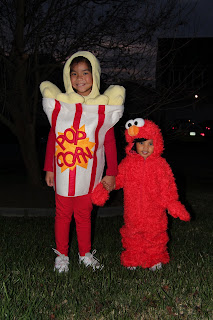 G and K getting ready to go trick-or-treating. Baby M was still recuperating and so she and I stayed home while the big girls went out with R, Grammy and D-daddy. 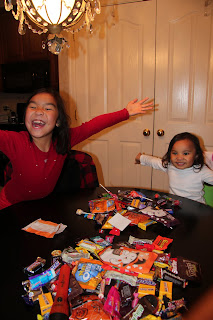