An Earthquake in VA, really???

Did we really have an earthquake in VA today? I'm still trying to process the reality that it actually happened. An earthquake was most certainly not on my bucket list of things to experience. In my east coast perspective, we are only supposed to hear about those on the news happening on the west coast to other people.

It was freaky and scary and unbelievable as it was happening. I was in my office at the computer and my first thought was a trash truck was going down the street outside. It started as a low rumbling sound that continued to get louder as things around me started to shake. My computer monitor was shaking and the cats were scrambling to get away from it. I'm not sure I can explain the feeling of absolute panic I felt when things started falling off shelves.

G was at school and the little girls were napping. K was upstairs and Baby M was asleep in her carrier in the family room because we had just gotten home from the doctor's office where she was getting her check-up.

Adrenaline must have kicked in because I remember sitting at the desk and then in the next step being upstairs snatching K off of the bed and then grabbing Baby M's carrier as I'm running into the backyard.

It seemed like one of those moments where time stops and then all of a sudden it was over and K and Baby M were still asleep and my heart was racing so hard that I could hear it. Not a good thing for middle-aged, out of shape people like myself :-}

According to the news it was a 5.8 magnitude earthquake-one of the strongest recorded on the east coast in the last hundred years. There were were several small aftershocks that I didn't notice but then there was one that measured 4.2 in the evening that started with that low rumbling sound again. I'm hoping that we are now at the "been there and done that" moment and can mark earthquake off of the list!

Now for some happy news-Baby M had her check-up today and weighs 10lbs 12oz and is 23" long. Her birth weight was 6lbs 6oz and so at 10 weeks old she is well on her way to making the "double the birth weight goal" by 6 months. I really wouldn't be surprised if she makes the mark at her 4 month check-up in October. 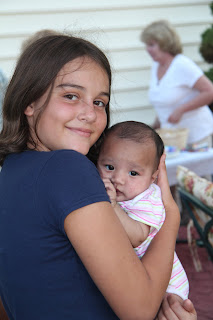