This past weekend we had the honor of participating in a beautiful wedding. G was the flowergirl in Russ' cousin's wedding (I hope I got that connection right :-)

I'm not sure who was the biggest princess-the bride or G :-) 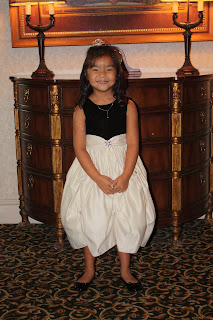 I'd like to tell you she danced all night but while dancing with the bride and bridesmaids she literally fell asleep standing up. We took our princess home and put her to bed at 10:00pm.

And you ask, where was Baby K? She had her first night away from home at Grammy's house. It went well, so we're hoping that this will be the first of many:-)
Posted by About Us at 1:43 PM No comments:

Fall is officially on it's way--the weather has become cool enough in the morning to wear a sweater and the girls each have colds. I will miss the laid back days of summer where we would just get up in the morning and not have to hurry anywhere. The days of just hanging out at the pool with the girls and doing whatever came to mind at the moment. We've gotten back into our hurry, hurry, don't be late schedule-school, homework, Daisies, Toddlin' Time, work......before you know it, the holidays will be here.

While I'm sad to see that time go, I'm not sad to see the humid, hot weather go. The cooler afternoons mean that the girls are more apt to play outside a little more. Last week R was doing some much needed home improvements and the girls were "coloring" with chalk. It was really neat to watch G show K how to hold the chalk. 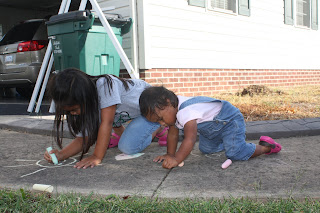 Halloween is just around the corner and the girls are busy deciding what they would like to be-K is going to be a monkey and G thinks she is going to be the tooth fairy. I managed to come up with a fairy costume that could be used for lots of different fairies in case she changes her mind. I'll try to post some pics shortly.

This past weekend, G and I completed our first races. It was her first 1k race and my first 5k since I've resumed running. (and might I note that it is much harder this time around:-)

I had originally tried to get G to do the Couch to 5K running plan with me but that was disastrous-anyone watching those first couple of training sessions would of had the impression that I am some type of super over-achiever parent pushing my child too hard and we were only doing the first week of training where you walk for 5 minutes to warm-up and then alternate 60 seconds of jogging with 90 seconds of walking for a total of 20 minutes.

After that, she and I decided that it might be best for her to just try the 1k and see if she liked it. After the race she said "she loved it" so I'm hoping that I've been successful in helping her to find something new that she likes to do. We also decided that we would try the Turkey Trot in November. 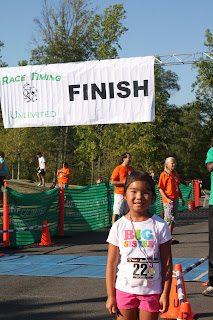 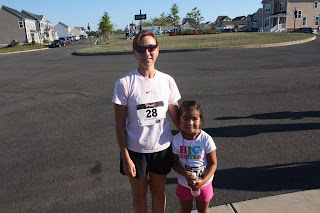 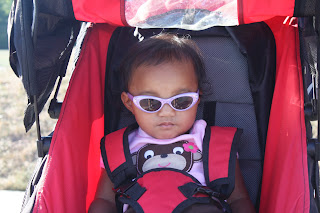 This waiting for the race to start is serious business!

I'm thinking K might be our sports girl. She'll pick up any type of bat, racket, or ball. She could be the first ambidextrous tennis star! 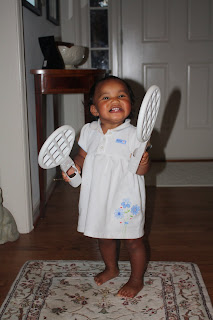